Why You Should You Care About Reducing Food Waste!

Considering that 795 million people around the world go hungry on any given day, it is shocking that many of us throw away food on a daily basis. In fact, one-third of all food produced globally goes to waste each year, amounting to 1.3 billion tons of wasted food with a value exceeding $1 trillion. According to a recently published report by the Food and Agriculture Organization of the United Nations (FAO), global hunger could be alleviated if just 25% of the food wasted each year was saved instead.

While food loss along the production line is a large contributor to waste in developing countries, in developed countries, food wastage tends to occur after it reaches the supermarket. This wastage is driven by affluent consumers who stock up their refrigerators with far more food than they can possibly eat before the recommended “best-by” dates. As a result, a large portion of uneaten food is discarded and simply replaced with even more food (which may later go uneaten). 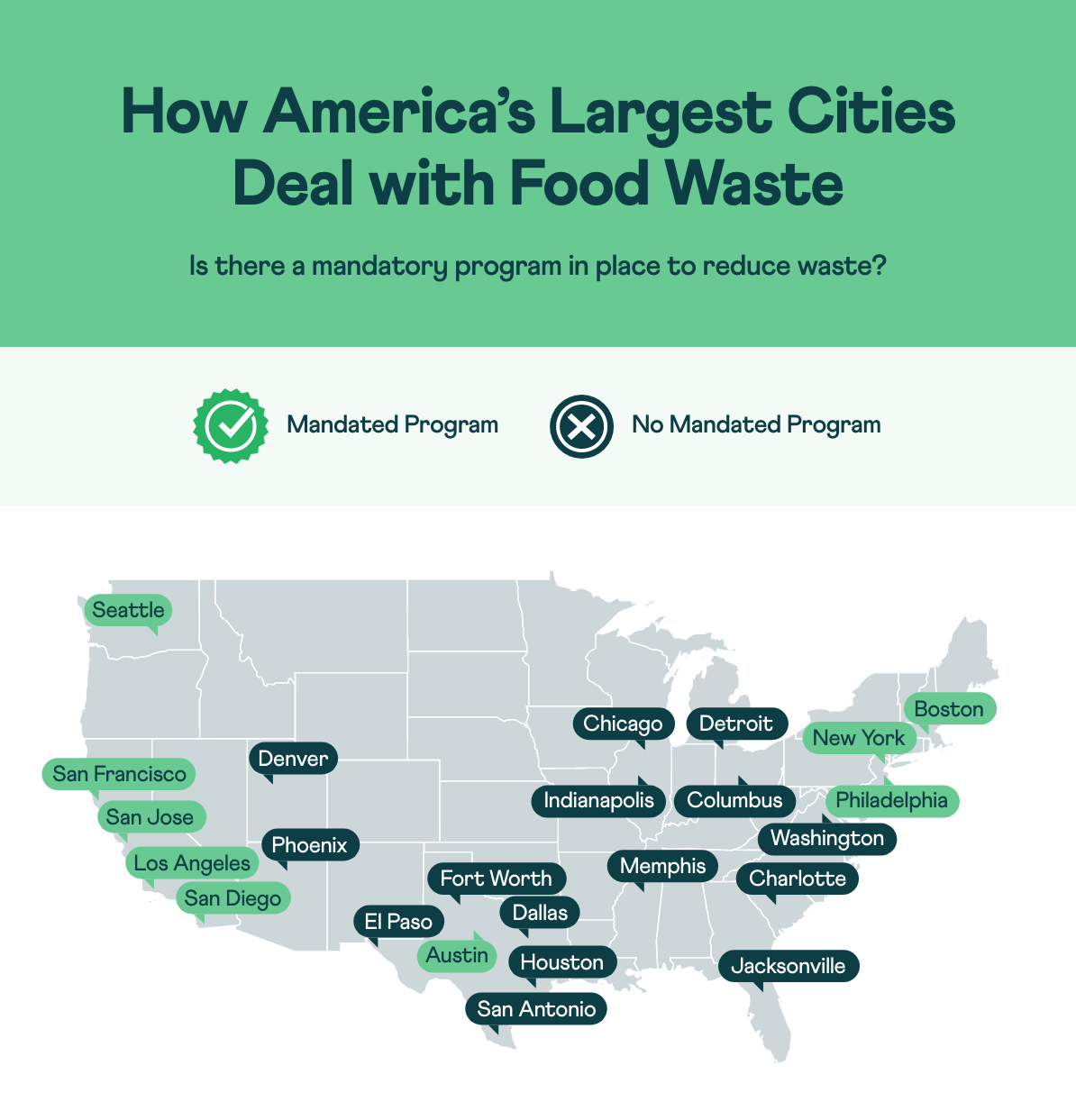 The amount of food wasted varies from city to city, and with only nine of the top 25 most populated cities mandating food waste legislation, there is a lot of room for improvement. The good news: We do have cities leading the effort to reduce food waste across the country.

California has recently introduced a Mandatory Commercial Organics Recycling law that requires all businesses to recycle their organic waste. CalRecycle has online resources that help consumers manage food waste, and it has been conducting workshops in support of a newly proposed Food Waste Prevention Grant Program.

As part of its Zero Waste Initiative, the City of Austin, Texas, recently voted unanimously for a city ordinance that requires all large restaurants (over 5,000 square feet) to separate compostable waste from other waste material by 2016; smaller restaurants are required to do so by 2017. The Home Composting Rebate Program offers consumers a $75 rebate on a home composting system after attending a free composting class.

Businesses in New York City have also heeded the call of a Zero Waste Challenge. Restaurants composted organic waste, trained chefs to improve meal planning, reduced the amount of food produced after peak periods, and donated surplus food to an NGO that provides meals to the city’s homeless shelters. The 31 businesses that participated in the challenge collectively diverted 37,000 tons of waste by increasing recycling efforts, composting over 24,500 tons of organic material, and donating 322 tons of food. Additionally, in July 2016 the city mandated the Business Organic Waste program, where qualified businesses are required to separate their organic waste for composting.

Every year the average person in North America may waste around 231 pounds of food, which if it's converted to energy, could power a 100 watt light bulb for two weeks. If you extrapolate that for the entire U.S. population, it represents a lot of energy that could be saved right there.

A country with a population of 319 million could waste as much as 74 billion pounds of food a year, which if saved could result in tremendous energy savings that could be put to much better use. But to reduce food waste, these savings need to be implemented from the bottom up rather than the top-down, starting in individual homes and businesses in towns, cities and states across the country. If each and every household and business made a concerted effort to reduce food waste, the collective savings regarding energy would be huge.

As we can see from the graphic above, reducing the amount of food we send to the landfill can result in both water and energy savings, or it can be recycled to produce energy that can be put to better use elsewhere.

By substantially cutting back on the food waste we generate, we could not only reduce world hunger but also reduce demands on resources such as energy and water.

Just imagine the positive impact it would have on human health if everyone on the planet could take a daily shower, or if electricity generated from food waste could be used to provide power to a field hospital. And what might the educational benefits be if every school-aged child had access to the internet?

WHAT TYPES OF FOOD GET WASTED MOST

Dairy products followed by fruits and vegetables make up the largest portion of food that is wasted, but these food items (along with eggs) can be recycled by composting. Additionally, the breakdown of organic waste, which produces biogas, can be used as a fuel for cooking or heating.

Composting is a common method of recycling organic material, including food waste. Organisms that occur naturally in soils break down organic materials to release essential plant nutrients such as nitrogen, phosphorus, and potash, as they convert organic matter into humus. Humus improves the nutrient content and water retention of soils and can be incorporated into gardens and farms to enhance crop growth – a boon for the backyard gardener who wants to produce her own supply of fresh organic veggies.

Another method of recycling organic waste is through anaerobic digestion, which produces biogas – a natural source of energy. Food waste is placed in a digestion tank, where it is broken down by microorganisms in an oxygen-free environment. The microorganisms release methane gas during the decomposition process and also leave a solid waste sludge that is rich in nutrients. The methane (biogas) is collected and burned to produce energy, while the nutrient-rich sludge (biosolids) can be used as organic compost to fertilize crops. For consumers, food waste can be collected and delivered by truck or through sink-disposal pipes to a municipal water resources recovery facility (WRRF) equipped with an anaerobic digester.

HOW IS FOOD BEING WASTED? 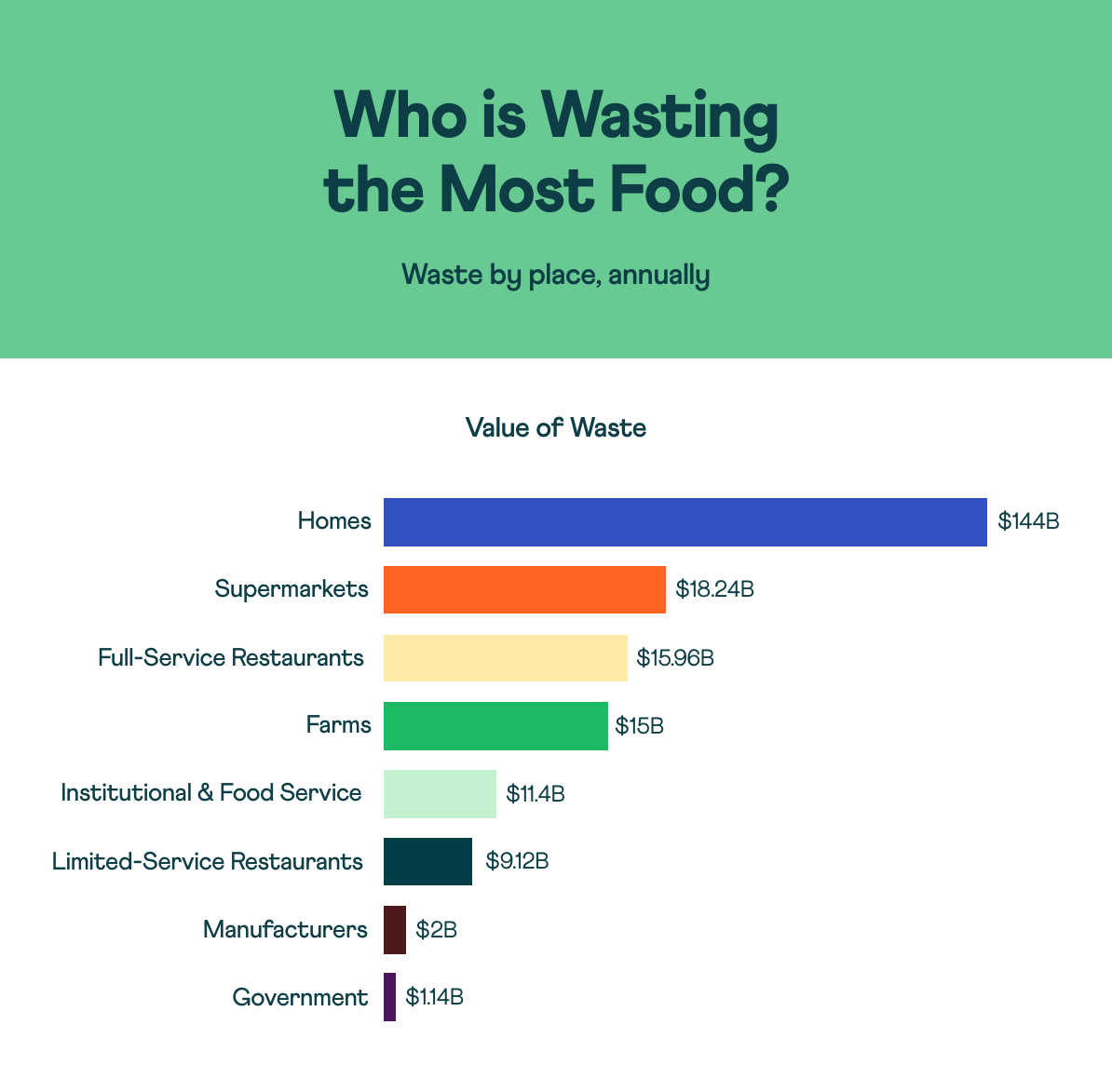 According to the ReFED report, food is wasted all along the supply chain: by the producers (farms and food manufacturers); by consumer-facing businesses such as retail grocery stores and restaurants; and finally by consumers in their homes. Food wastage by consumer-facing businesses and homes accounts for the largest portion of discarded food (80% combined), while food wastage in the home accounts for the highest economic cost ($144 billion).

Food wastage on farms is typically composted or incorporated back into the soil, effectively recycling nutrients for the next crop. Consequently, farms do not send much of the food waste they generate to landfills, but rather they recycle it on-site. Food manufacturers also recycle 95% of the food waste they generate (rather than composting the wasted food, they typically use it in animal feed). By comparison, less than 10% of food waste generated by consumer-facing businesses and consumers – estimated at 52 million tons annually – is recycled. The apparent lack of interest in recycling food waste, compared to recycling materials such as metal, glass, and plastics, can be attributed to high transport costs and poor financial return to offset costs.

STOPPING THE WASTE STARTS AT HOME

Now that we know that consumers are the largest source (43%) of food wastage, we must take action. If we wish to reduce the amount of food that we waste, we need to change our behaviours. Click through the flipbook below to discover ways to minimize food wastage in your home.

Food loss and wastage – during production or after it reaches the market – results in less food being available for people to eat. Food prices, like that of any other commodity, are driven by supply and demand. Since the demand for food is continuous, any reduction in supply will cause prices to escalate, hurting the poorest among us.

When food is wasted, the resources used to produce these foods, such as land, energy, water, fertilizer, labour, and capital, are also wasted. When food is discarded, more food needs to be produced and transported to markets to supply people’s continuous food needs. As a result, more fuel is used, producing more carbon emissions.

Also, food waste is organic waste. When sent to a landfill, it releases methane gas as it breaks down. Considering that methane gas is a potent greenhouse gas – with landfills being the third-largest source of human methane emissions, and the organic waste being the largest component of landfills – food waste contributes substantially to climate change. Therefore, curbing food wastage would be a significant step in reducing certain greenhouse gas emissions.

Addressing food waste is an important issue, as it impacts food security, natural resource use, and climate change. However, it is something we can all actively help reduce by making small changes in our purchasing habits and daily lives.

To reduce the amount of food waste we send to the landfill each year, we as consumers must make a concerted effort to prevent wastage in the first place. When waste can’t be avoided, we need to recycle food waste into products or energy sources – such as compost, animal feed, or biogas – that benefit society.