What are you really getting from your milk alternatives?

The “milk debate” is endless, controversial and can get quite heated. There is so much information out there that it is difficult to know which side to choose. You would have heard things like:

So let’s have a look at some of the different milk options available and the science behind it all.

You can choose to live on the edge with raw milk..

Raw milk includes any animal milk that hasn’t been pasteurised. Pasteurisation is a process where milk is heated to destroy harmful bacteria, including those that cause listeriosis, tuberculosis, typhoid fever, diphtheria, Q fever, and brucellosis. The Centers for Disease Control and Prevention indicated that between 1993 - 2012 raw milk resulted in 1909 illnesses and 144 hospitalizations. The CDC urged that these numbers only reflect the formally reported cases, thus suspecting there may be many more. The risk of getting a foodborne illness is around 150 times more per raw dairy product compared to pasteurised dairy products. The trend of consuming raw milk has increased over the last few years, even though the sale of it is banned in many countries. The rise in the consumption of such products was influenced by the increase in false claims made about its benefits to humans. So what is the truth:

While there are many great dairy and dairy-alternative options available, we recommend not subscribing to this trend.

How about the choice to go skinny on skimmed milk? 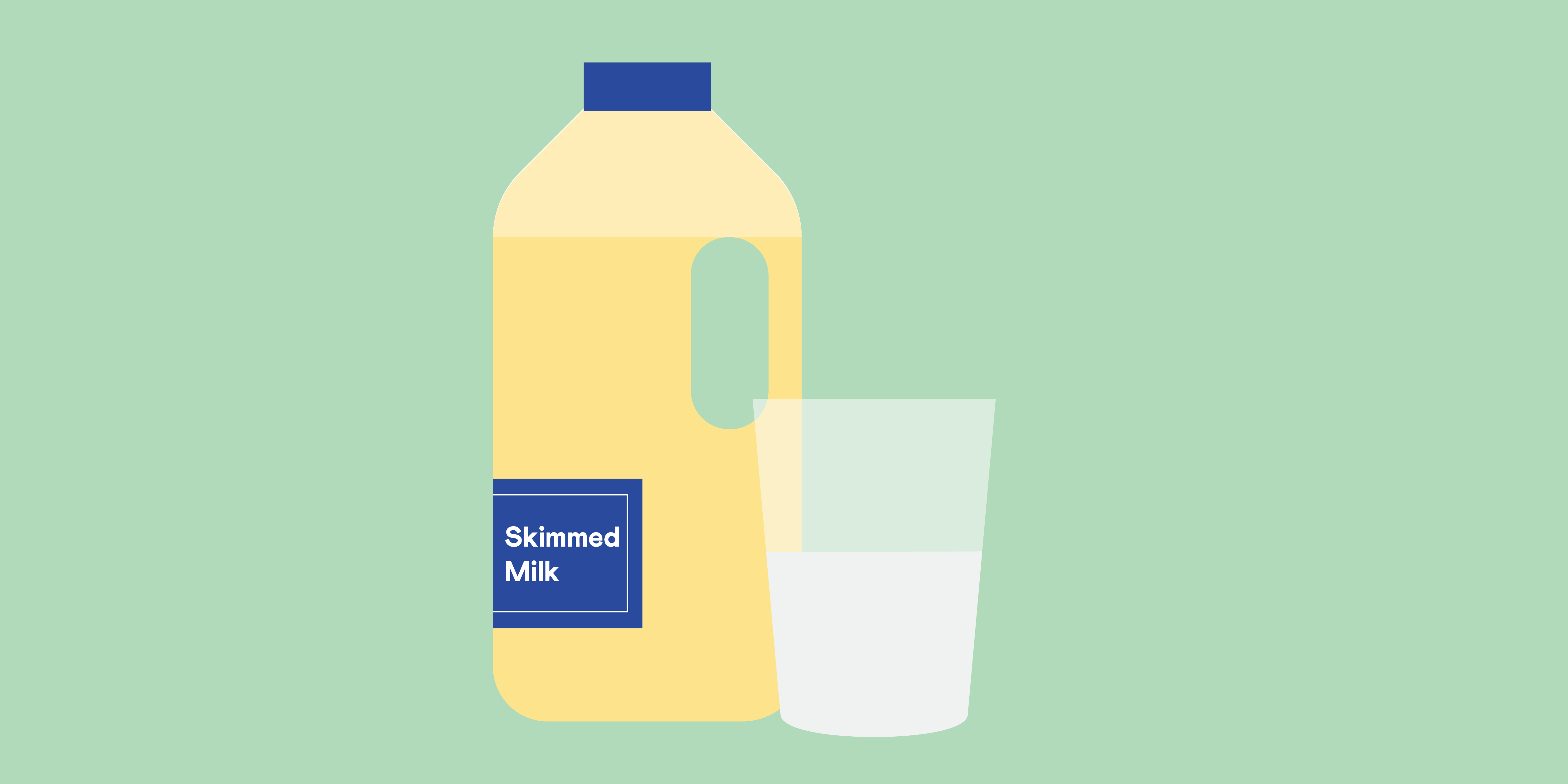 Cow’s milk is full of nutrients without needing to be fortified. For various reasons, natural dairy products come highly recommended by many countries as healthier milk options. Such dairy products have been shown to decrease the risk of heart disease, osteoporosis and several cancers. Lower fat dairy products like skimmed milk are often said to be higher in sugar and full of “other bad things”. The primary difference between these products would be the fat content (the only altered nutritional component), which in return affects the overall calorie content. The change in fat content will alter the taste of the milk, making skimmed milk much less creamy. The “sugar” content within the milk is all relatively equal and is all made up of lactose, which is the naturally occurring sugar in milk. The problem comes in with the labelling of dairy products as there is no differentiation between lactose content and added sugar on the nutrition label. Despite all the myths, consuming skimmed milk will in no way increase your added sugar intake.

Would you be open to try a little soy? 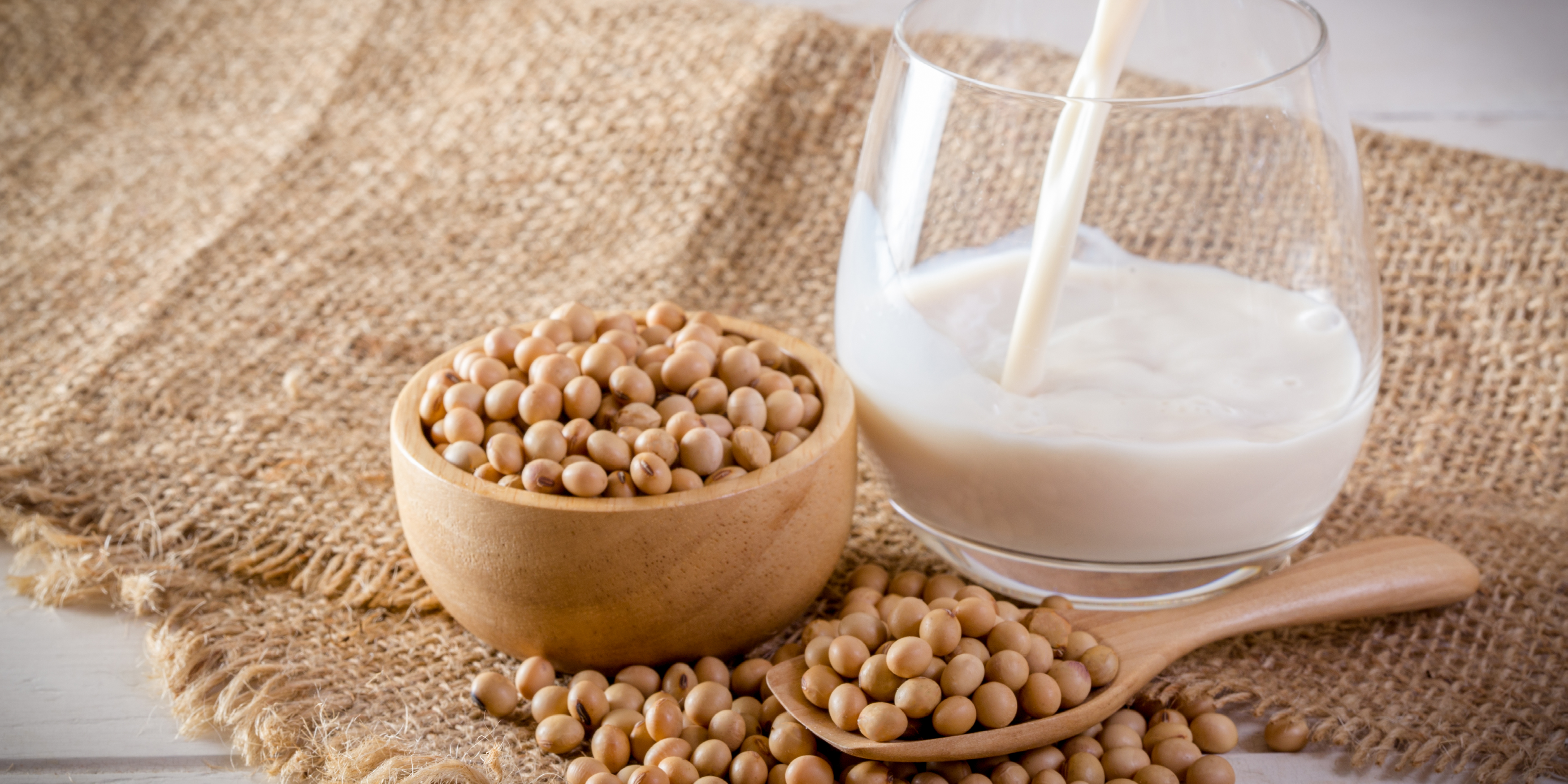 Soy milk has a very similar nutritional profile to that of cow’s milk. It is naturally low in saturated fat and contains more unsaturated fats, which are regarded as heart healthy fats. Numerous studies have shown that regular intake of soy milk can help to decrease triglycerides and bad cholesterol (LDL), while increasing good cholesterol (HDL). To ensure you benefit the most from soy milk, we would recommend getting one fortified with vitamin D and calcium. Soy milk is a great alternative for lactose intolerant and vegan individuals and would best replace regular cow’s milk in the diet.

Do you have a taste for the “nutty”? 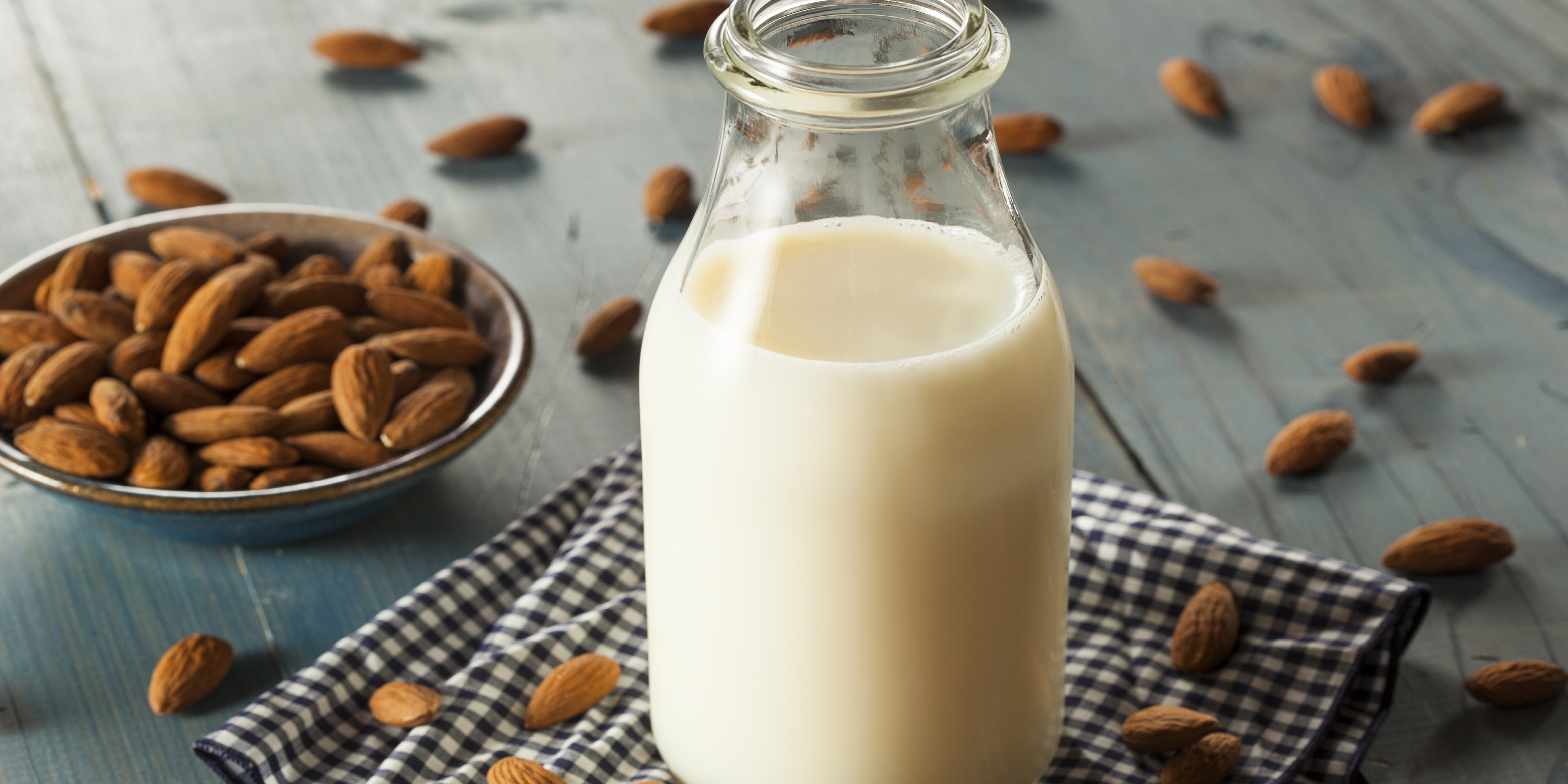 There are a variety of nut and seed milk options to choose from, including almond, cashew, hazelnut, macadamia nut, walnut, peanut, flax and hemp milk. All of these are very low in calories, and protein. Comparatively, regular cow’s milk contains 8g of protein per 250ml (1 cup). To get the same amount of protein from different nut and seed milks, you would have to consume a lot more of it (see image). 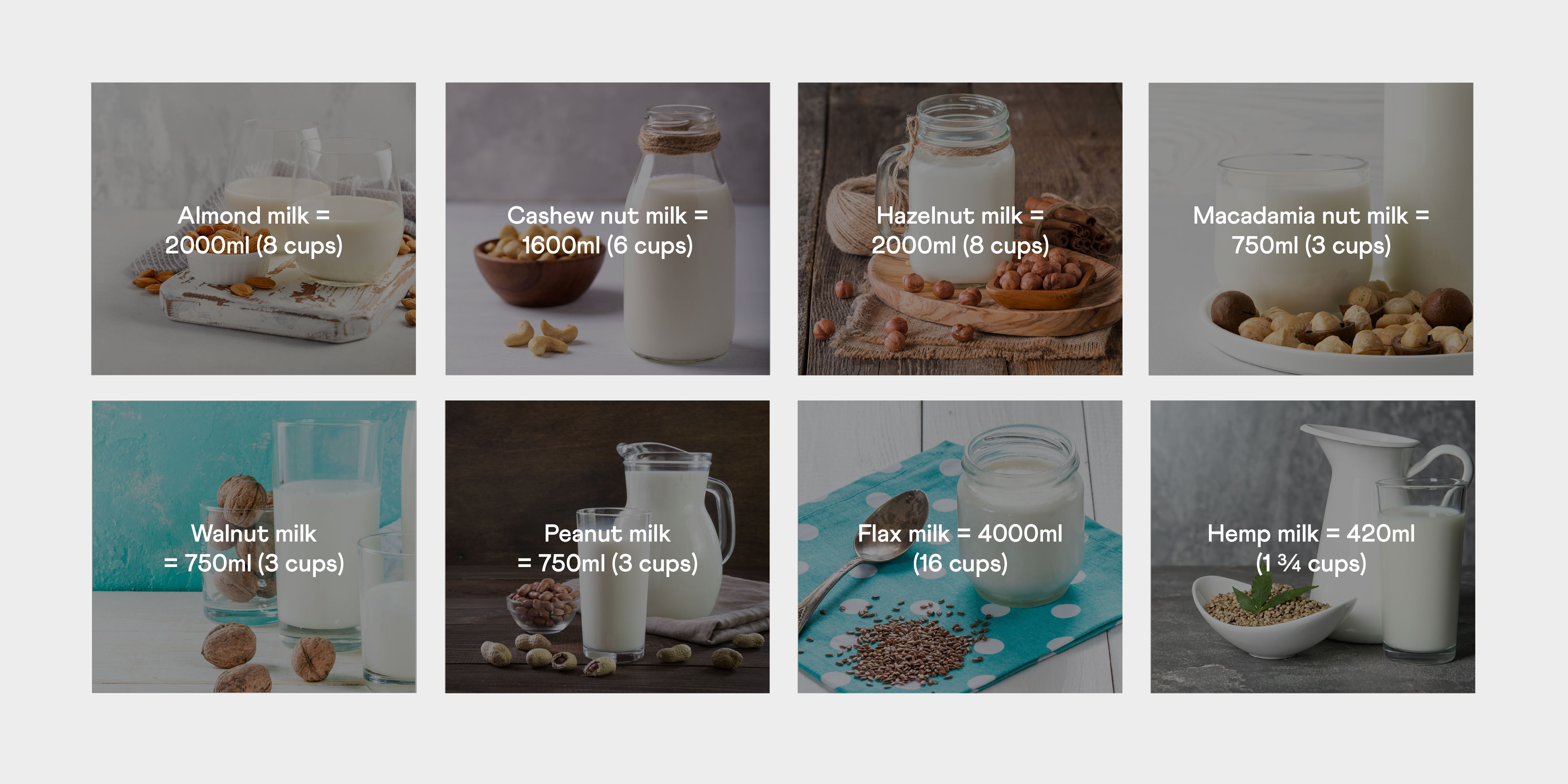 While there is no harm in consuming nut and seed milks, it is worth noting the lower nutritional content so you make up for the missing nutrients in other parts of your diet. 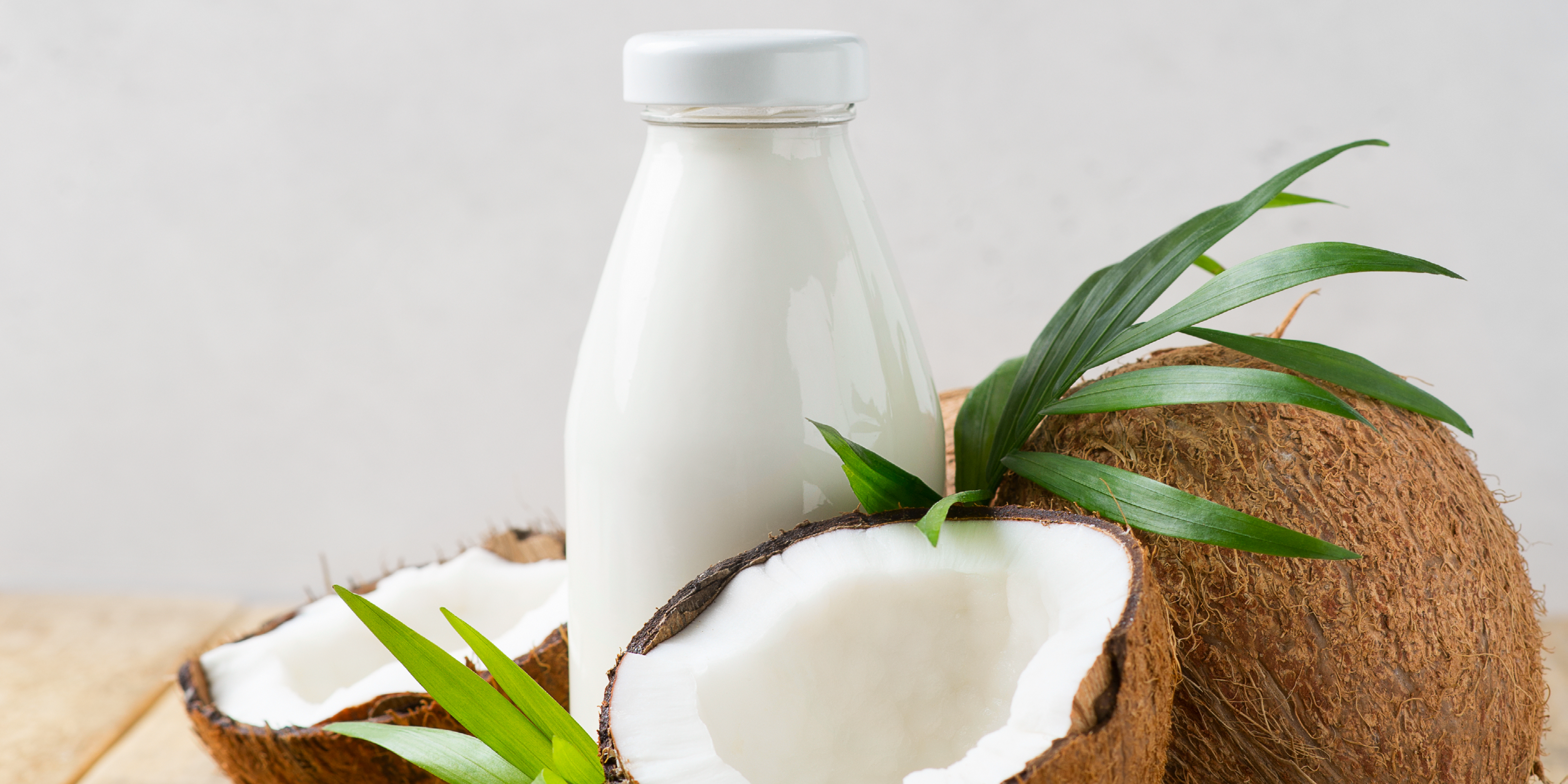 There is a lot of information advocating for the use of coconut milk. 250ml (1 cup) of cow’s milk contains 5g of saturated fat compared to 53g in coconut milk. While saturated fat is not all bad, it still should not be consumed in excess. The primary fatty acid found in coconut milk is lauric acid, which is a MCFA that acts like a long chain fatty acid (LCFA) in the body. MCFA’s are broken down and absorbed a lot faster compared to LCFA’s. The longer the breakdown and absorption process, the more fat will increase your risks for high cholesterol and heart disease. So, while you may love the taste of coconut milk, it is best to consume this in moderation or find a lower fat alternative.

Don’t forget about the other animals

Goat milk has a very similar nutrition profile to whole cow’s milk, but it’s lower in casein (cow milk protein) content. Goat milk has the benefit of being high in MCFA’s, therefore easing digestion. These fatty acids allow goat milk to provide you with energy without storing it as body fat. Sheep's milk is one of the creamiest animal milk products. Like goat's milk, it is higher in MCFA’s easing digestion. Both goat and sheep’s milk have a lower lactose content compared to cow’s milk, and are often used by many lactose intolerant individuals.

How about a milky drink for the trendy?

Rice milk, pea milk and potato milk are the new thing. Potato milk is gluten free, kosher friendly and is starchy, but it also has a smooth texture with a potato chip after taste (obviously). It has around half the calories of cow’s milk, but is 1.5 times higher in carbohydrates, lacking protein and fat. On the other hand, pea milk is a great source of protein with the same protein content as cow’s milk, while being lower in carbohydrates, fat and calories. It surprisingly still has a very rich and creamy texture even with the low fat content. Whereas rice milk is the safest alternative for individuals who have a lot of allergies because it’s made by only combining water and milled rice. It’s lower in calories compared to regular cow’s milk, but it has twice the carbohydrate content. We would recommend trying pea milk first if you want to dip your toe into the trendy alternatives.

As you can see, there are many different types of milk and milk alternatives to choose from. When making the decision about what milk product would be ideal for you, it is best to look at your genetic saturated fat sensitivity, as well as your lactose tolerance when making this decision.