Is eating insects the future of sustainability?

Did you know that around 1,900 species of insects have been identified as suitable food for humans?

Although, to many of us, the thought of eating bugs isn’t very appetising, insects have begun to be recognised as a sustainable food source for the planet

It’s no secret that there has been a perspective shift in our world today, and we are now focused on rectifying the ill effects that mass production and overconsumption have placed on our environment.

We have started to recognise that the way that we use food is totally unsustainable and harmful to ecosystems, but we still need to eat in order to survive…

And so this is where sustainability, regarding our farming and our consumption, takes centre stage, and why we, us resourceful humans, have been looking into using other alternative food sources that reduce our carbon footprint and generate positivity in the growth of the planet, rather than the destruction.

But back to the insects… 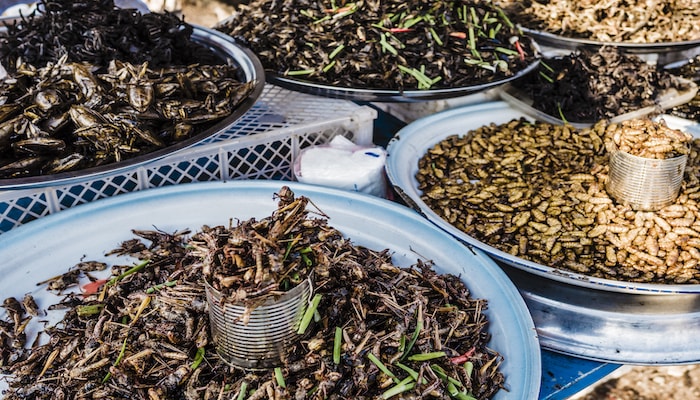 It must be noted, however, that the form in which we consume these insects differs. For instance, it wouldn’t be about eating a full grown bee for f (that wouldn't work), but eating the bee larvae found in honeycomb is healthy. And the same goes for termites, flies, and caterpillars (to name a few), whereas crickets and grasshoppers can be eaten full grown.

One of the main health benefits behind edible insects are the large amounts of protein found in these small creatures.

With sustainability being the main focus, it has been widely recognised that insects produce far less greenhouse gases when farmed, and they are easier to maintain in more small-scale operations. Their feed is much less than, for instance, cows that need to be in large fields and eating a high amount of feed daily in order to survive and be large enough to get meat from.

A recent study was done that compared insects and meat, for the purpose of combating diseases caused by over-nutrition and although the study discovered that there was no evidence that any commercially available insect evaluated in the current study is significantly preferable to meat, they found that there were other non-health-related benefits that were more positive that farming livestock.

The positive benefits extended to both financial and environmental cost, particularly in developing countries where under-nutrition is a key problem.

The finding that insects and meat do not show significant divergence in nutritional composition suggests that there is no health-related trade-off in promoting insect foods over meat.

Therefore, although there is no reason to change from meat to insects on a nutritional level, there is no question that not only are insects more sustainable and positive for the environment, but that they could also be used to combat the growing issue of world hunger.

According to The World Bank, the global population is expected to increase to 9 billion by 2050, which means we need to produce around 50 percent more food in order to feed an extra 2 billion people.

With climate change expected to reduce crop yields by more than 25 percent, there is an urgent need to identify alternative ways to meet the need for additional food.

Of course, there is technology in place to make up for this such as GMO crops and a rise in veganism where the nutritional content of vegan foods is rapidly improving daily and is already on a par with foods found in a normal balanced diet. But the consumption of insects offers a new alternative that only has to rely on a change in mindset regarding how we view a whole population of creatures that exist with us on the planet. Their ecosystems and populations are vast and although only in its infancy, a decade or so from now we could find ourselves tempted to try out the cricket burger at our favourite restaurant.

But until then, get Health Fit - an easy to follow plan for those trying to improve their nutrition, fitness and overall health.